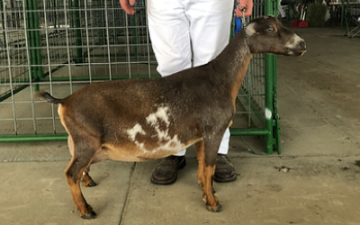 Magic is an excellent doe who exemplifies what we want our breeding program to produce. She shows a correct balance between body capacity and dairy strength. Her mammary system is well attached with strong definition of medial, correct height and width of escutcheon, with ample capacity and fore udder extension. She became our first homebred finished champion in 2016 and has won Grand Champion and Best of Breed several times since the, even placing in the top ten of her class at the ADGA National Show.

Magic is not only a correct and productive doe herself, but she is also an excellent brood doe. Her 2017 daughters, Vanish and Luv Potion, were 1st and 3rd in their classes at the National Show, respectively. Magic has been bred to Rosasharn CB Katmandoo *B for a repeat breeding that produced Vanish and Luv Potion. As of November, 2017, Magic has earned her superior genetics designation and is our first homebred SGCH!