We sold SGCH Cade's Lil Farm BD Meggie as a kid. Little did we know that her full genetic sister, SGCH Cade's Lil Farm Magic 2*M VEEE 91, would turn out to be so successful. After Magic finished her championship, we began asking Meggie's owner if she would let us buy her back. In spring 2019, we were finally able to make it happen!

Meggie is a welcome addition back to Cade's Lil' Farm. She is extremely strong in general appearance, being level across the topline and wide in the front end assembly. She stands on a strong set of feet and legs and has one of the best mammary systems our breeding program has ever produced. We took her out to the Illini Interstate Showdown for her first show ever, where we were thrilled to see her win Senior Champion and Best of Breed in two rings and Best Udder of Breed in a ring as well! She finished her ADGA and AGS championships at the Heart of Illinois Summer Classic by winning another Grand Champion and Best of Breed award. In July of 2019, Meggie appraised at VEVE 90! We are so thrilled to have this doe back and can't wait to see what she has to offer our breeding program in the years to come.

In 2021, Meggie joined a very elite group of Nigerian does. As a seven year old, sixth freshener, Meggie appraised EEEE 92! 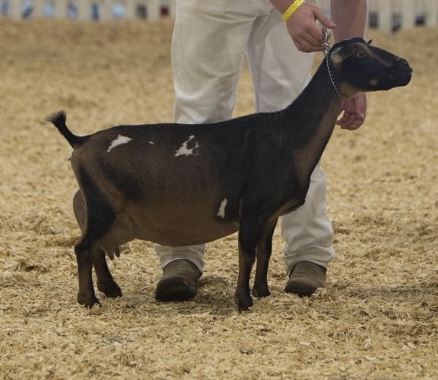